Over the past several months, we’ve received a bunch of great feedback from DN beta users. A mix these suggestions and onboarding observations has helped shape the features and improvements we’ve made to the administrator experience.

👋 For those of you that are new here, Defined Networking was founded by the creators of the Nebula Overlay Networking Project. Nebula enables scalable connectivity between any number of hosts with on-demand, encrypted tunnels.

Our goal with DN is to help organizations realize the connectivity and security benefits of overlay networking without the overhead typically involved with the self-hosted, open source approach.

DN is an overlay networking solution built for organizations that need reliable, secure connectivity between thousands of hosts distributed across any number of networks.

Includes everything needed to manage a highly scalable overlay network:

Steps for enrolling a new host via API

The DN service validates the enrollment code before minting a new host certificate, which is returned to the host along with the configuration details necessary for the host to join the overlay network. 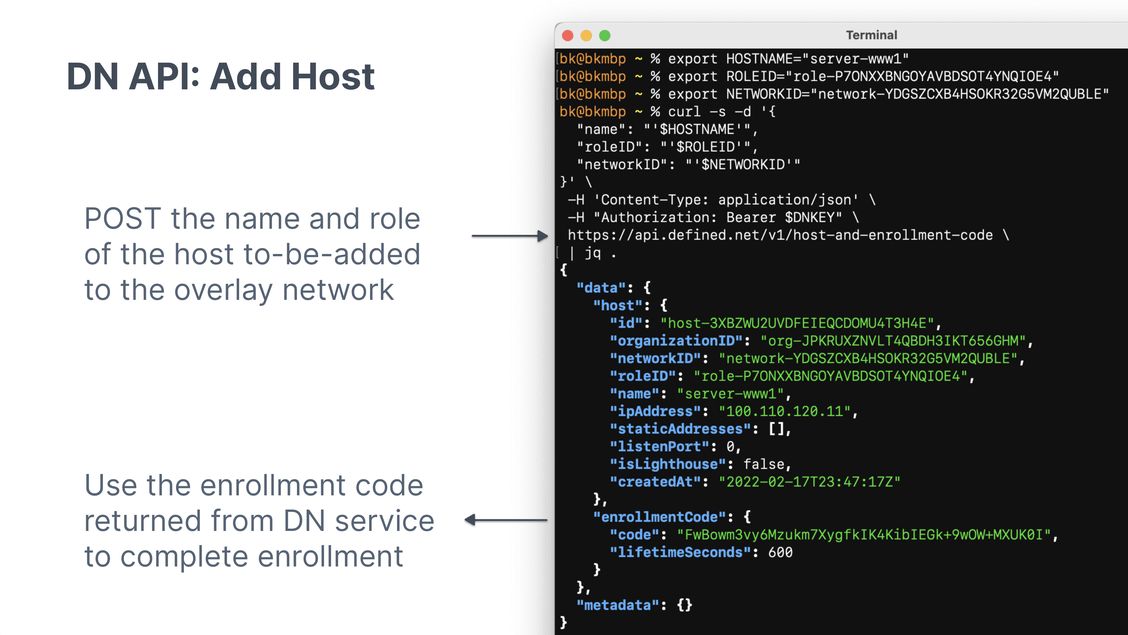 Among other metadata, each certificate also has a validity period. When two hosts are handshaking, they will verify each other’s certificate:

If all checks pass, mutually, between the hosts, they will continue the handshake process and establish an encrypted channel between one another.

Similar to other PKI systems, it is a best practice to “rotate” the certificates (and corresponding key pairs) on a regular basis. The Nebula open-source project provides the tools to generate and sign certificates, but it leaves the production process and implementation up to the user.

DN takes the best practices for running a large-scale, production overlay network and handles all the details on behalf of each customer.

Each DN customer gets their own CAs, which are fully managed as part of the DN solution. In a recent update, we added the support for rotating CAs automatically. The necessary host configuration updates will also get pushed out automatically.

This improvement is one of those behind-the-scenes capabilities that isn’t flashy, but is critical for running a production overlay network. We’ve put a lot of work into getting this implementation right, so you don’t have to think about it.

But… if you want to talk details, we are here for it. 💜

Lighthouses are a special type of Nebula host that provide a “lookup” service to other hosts on the overlay network. Every network requires at least one lighthouse, typically with an Internet-routable IP address that allows inbound UDP traffic on a specific port.

When an overlay host wants to connect to another it sends a query to the lighthouse,

The lighthouse will return a list of IPs & UDP ports it learned about when the requested host came online. Lighthouses also assist with NAT traversal between two hosts making a direct connection.

DN supported a single lighthouse from the very first beta. Now, each customer can run multiple lighthouses, which is especially useful for large and geographically distributed overlay networks.

Nebula has always supported multiple lighthouses, but in order for existing hosts to learn about a lighthouse that was added or deleted they would first need to get a new Nebula configuration. Then, each host would need to restart its Nebula process to load new lighthouses.

DN improves this process: Any time an admin adds or removes a lighthouse, the DN service running on each host will pull in the latest configuration information within 60 seconds.

As part of this release, we also added the ability to load a new lighthouse hostmap to core Nebula. (No more restart required!) All existing host tunnels will continue to run without interruption.

That’s it for this update. Thanks again for your interest!

Feel free to send an email with any comments or questions. 🪐

Take the hassle out of managing your private network with Defined Networking, built by the creators of Nebula.